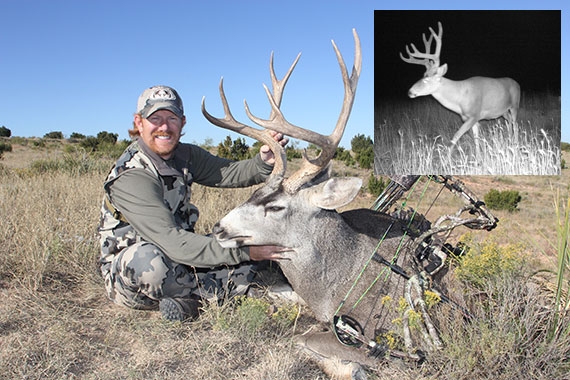 "I did my own Mass XL experiment. I targeted one specific, mature mule deer buck in the Texas Panhandle. He had a small home range and I had lots of history with him. From April 1, 2013 until October 1, 2013, I kept a trough filled with corn and Mass XL in that buck's core area. I kept a trail camera over the feed for those six months. This buck visited the trough approximately every other day for those six months. Not once did he visit the trough in daylight, sneaky! On October 22, I shot the old buck with my bow. He was aged by tooth wear at 7 1/2-years-old. His symmetrical 10-point rack gross-scored 156-inches P&Y. I have the matched set of sheds from the previous year. With inside spread, his 2012 rack scored 143-inches. I'm convinced the Mass XL kept this buck in good health and influenced the growth of his antlers. All this in a drought year, too."